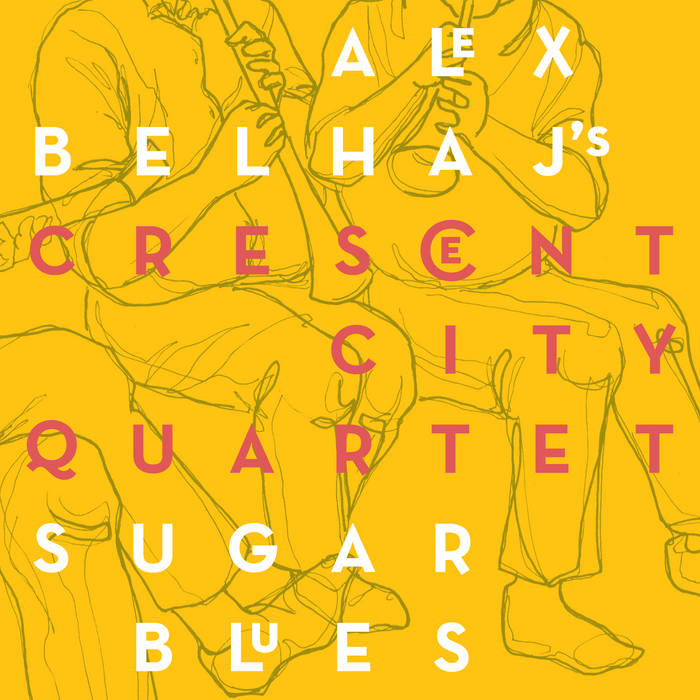 The word tradition is derived from the Latin tradere, signifying cultural elements that are handed along for the good of all. It’s the same etymological root as the word trade. Traditions can and do work both ways. The musicians of today give back to musical ancestors who continue to send us gifts and messages. Magic from the dawn of the 20th century re-manifests in the 21st.

Periodically, Alexander Belhaj’s strongly steeped devotion to living tradition transports him and his guitar to New Orleans where he sits in and absorbs the continuum firsthand. Alex, like Marty Grosz, is a predominately chordal guitarist and a devoted follower of the great Al Casey. Listen deeper and you’ll find yourself surrounded by the spirits of Bernard Addison, Teddy Bunn, Dick McDonough, Eddie Lang and Bill Basie’s rhythm man Freddie Green. Alex is a gentle soul whose friendliness, diligence and sincerity are all too uncommon in a hard-boiled world.

For this recording project Alex assembled an intimate group of skilled improvisers who share his passion for music from the 1920’s and ‘30s. Clarinetist Ray Heitger has served for many years as Toledo, Ohio’s grand interpreter of traditional jazz. His inspired solos and visceral vocals bring caloric urgency to any gathering. Regular engagements with Paul Klinger’s Easy Street Jazz Band, in fact, have sent tremors throughout the far west side of Ann Arbor. Heitger’s playing invites visitations from clarinet legends Jimmie Noone, Rudy Powell, Omer Simeon and {when Ray really gets to feeling right} even Rahsaan Roland Kirk.

Cornetist Dave Kosmyna has devoted much of his life to the early strata of the jazz tradition. His Great Lakes peregrinations include distinguished service in Buffalo, Toronto, Toledo and Ann Arbor. While basking in the glow of his horn you might feel Herman Autrey, Lee Collins, Joe Oliver and Rex Stewart hanging out at the table near the back. Alex Belhaj’s Crescent City Quartet is anchored and illuminated by Hamtramck-based string bassist Jordan Schug. Also a master cellist, Schug has worked with Paul Keller’s Orchestra and the Hot Club of Detroit. The interaction between mister Belhaj and mister Schug is particularly gratifying.

Alex has selected his weave of stomps, blues and spirituals most carefully. In choosing to perform melodies by Louis Cottrel, Clarence Williams, Artie Matthews and the Mississippi Sheiks, he has demonstrated a keen awareness of our cultural legacy. The heart of this album may be found in the cluster of tunes that includes “Four or Five Times”, “His Eye is On the Sparrow” and “Viper Mad”, a defiantly hedonistic number premiered by Noble Sissle and Sidney Bechet in 1938. The CCQ’s realization of this ode to Mezz Mezzrow’s favorite herbal analgesic features a spirited group vocal similar to what Ann Arborites have come to expect from Phil Ogilvie’s Rhythm Kings. Impressionable souls may feel the need to stand up and strut around with one index finger in the air.

Thanks to my family, friends, mentors and all the fans!

Bandcamp Daily  your guide to the world of Bandcamp

Serena Cherry debuts her black metal project, plus a Pick from the Crypt block from Svalbard